Countless families have sent their children to Kanakuk to allow them the opportunity to grow in faith, confidence, and Christian character. Over the decades, we've seen entire families transformed as Kampers return home with a heart to serve God first, Others second, and themselves Third. 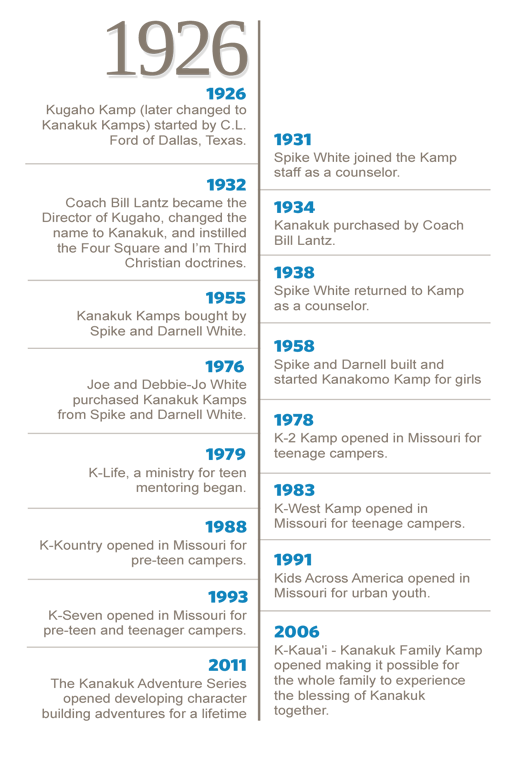 Over the course of nearly a century, Kanakuk summer camps have been part of history...

1976: Hank Aaron hits his 755th and last home run, and Apple Computer is founded. At Kanakuk, Joe and Debbie-Jo White take the reins and purchase the premier summer camp from Spike and Darnell White.

1979: The Dallas Cowboys lost the Superbowl, but Kanakuk Kampers from all over the Dallas area enjoy a summer at Kanakuk summer camps. This is the same year that Joe White leads the formation of K-Life teen ministry.

1988: The Summer Olympics were held in Seoul South Korea, while Kampers from all over the United States trained and played hard at Kanakuk's Summer Olympics parties. Kanakuk's Joe White and Directors open K-Kountry camps' gates for the first time this year.

2006: Twitter is launched changing social media history. It may have taken a few years, but Joe White and Kanakuk lead the way in using social media technology to keep parents informed about the safety and well-being of Kampers.